“What the mind doesn’t understand, it worships or fears” – Alice Walker

In many parts of Africa, people with Albinism are butchered for body parts due to age-old superstitions that continue to feed into myths that people with Albinism are ghosts, sorcerers or demons. Now, this is an extreme view on Albinism not necessarily seen here in the US. Still, I have witnessed from various Facebook groups parents sharing stories of people making unnecessary ignorant comments towards their children. Maybe if we all just had a little more understanding of what it really means to have Albinism we can slowly dispel any myths surrounding it.

In light of this, I wanted to look at the bare facts of exactly what is Albinism. Before having Nash I really had only a vague understanding of what it meant to be a person living with Albinism even now I only know from looking in not looking out. I, like many people out there, had this misconception that it meant a person had red eyes and white hair, boy was I wrong.

I could probably write an essay with all the information there is out there, however, I decided to pick out the basic facts about how Albinism affects an individual.

The biggest realization for me was that people with Albinism are visually impaired that is why there was such a disconnect with me when addressing Nash’s lack of vision. People with albinism have vision problems not correctable with eyeglasses,  they have low vision and are considered legally blind. It is the abnormal development of the retina and abnormal patterns of nerve connection between the eye and brain that cause these problems.

Most people with Albinism have extremely fair skin and must wear sunscreen, hats and protective eyewear to limit the exposure to light and UV rays.  I have hats, sunscreen and sunglasses stashed everywhere although on some occasions, usually when the sun is at its hottest and brightest, I somehow can’t find any of them. I try not to overreact and run inside like Nash is going to spontaneously combust although I do know it is incredibly uncomfortable for him visually. As a family, we are extremely lucky to live in a country where all of the sunscreens, hats, sunglasses and dermatologist offices are accessible and affordable. Despite photophobia and the fair skin we plan to be at the pool most the summer (with protective gear of course), when you live in Houston where it feels like somebody has put you under a sunbed and wrapped you up in clingfilm (Saran Wrap to you Americans) for half of the year, there is no better place to be . I am hoping when Nash realizes how beneficial his hat and sunglasses are he will stop ripping them off his head every 5 seconds. I hear like with anything in life perseverance is key.

On that note, I leave you with this little dude…….. 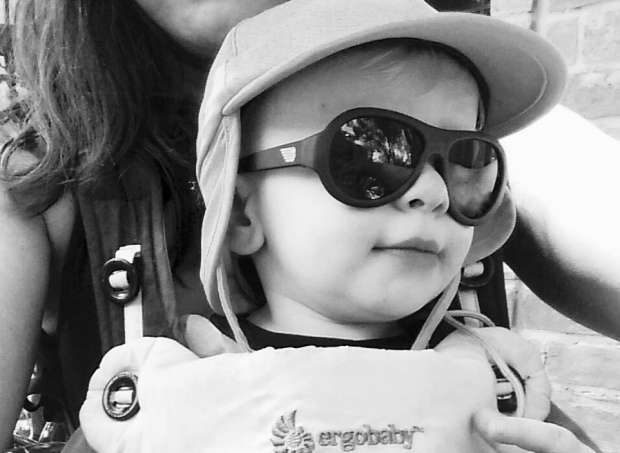 Feature image – Nash sitting in the ergo baby wearing his black Babybanz and sunhat. The image is in black and white.