I feel like I am having empty nest syndrome except nobody has actually left the nest yet. I wonder if there is a word for a stay-at-home parent who suddenly finds themselves minus a child to look after. I made the decision to put Nash in school earlier than intended as a spot opened up in our pre-school of choice. I had already decided that he would go 3 days in the summer with his brother and then full time in September so the notion of him starting school wasn’t something new. However, I wasn’t ready for how gut-wrenchingly terrible I would feel. When my eldest started preschool it was a last minute decision as my husband was working and at school. We never saw him and that in turn meant I was working my butt off. I needed the break that pre-school would provide, I was desperate for it, I was also pregnant and feeling exhausted. When I dropped him off that first day, his wailing through the walls was a little hard to take but really I almost did a little dance out the door, I know I am THE best mother.

When I dropped Nash off at school my immediate reaction was to cry the really ugly kind when you cannot talk. I felt horrible like I was betraying him in some way. I was, I was ditching him so I could spend five and a half hours with my eldest son. The crying was so bad that my eldest asked me what was on my cheeks, I told him tears, he said “tears of happiness”. Kids have a way of making you laugh when you least expect it.

That first week Nash attended preschool I received an email from the Nystagmus Network it included a personal story written by a child with Nystagmus that was published in FOCUS Magazine in the 1990’s. It didn’t do anything to ease my fears about what school life will entail for him but it was incredibly interesting to read about Nystagmus from the perspective of the individual dealing with this type of condition. Luckily for me, Nash is a long way off from the typical classroom environment that the child writes about.

Here is the link to the story and for anybody who is reading this as the parent of a child with albinism or nystagmus here is the resources link where you can find a booklet written by the Nystagmus Network. The booklet especially made for teachers and their school’s provides information about nystagmus and what assistance a child with this condition requires. It was written for the UK school system but I find it has some really valuable content. 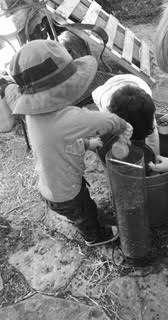 One thought on “School days are upon us.”